After a successful late-season run with the Hawks in 2020/21, veteran guard Lou Williams has agreed to re-sign with the team on a one-year, $5MM deal, according to Shams Charania of The Athletic (Twitter links). 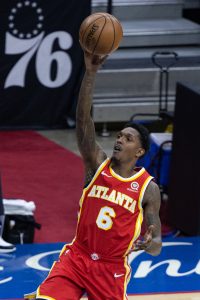 Williams, a three-time winner of the NBA’s Sixth Man of the Year award, began the 2020/21 season with the Clippers, but was sent to Atlanta in a deadline deal involving Rajon Rondo when the Clips determined their backcourt needed more of a play-maker than a scorer.

Having spent the last three-and-a-half seasons in Los Angeles and having won two Sixth Man awards with the franchise, Williams was hit hard by the trade and admitted he contemplated retirement upon being sent to the Hawks. However, his arrival and his strong play in Atlanta helped push the team to the No. 5 seed in the East and the third round of the playoffs.

The Pacers, Bucks, and Heat were among the other teams linked to Williams during free agency, but a reunion with the Hawks was always viewed as a realistic possibility. While the 34-year-old won’t get the multiyear deal he’d reportedly been seeking, his $5MM salary will be nearly double the veteran’s minimum.

The Hawks had Williams’ Bird rights, so they won’t have to use cap room or a mid-level exception to re-sign him.