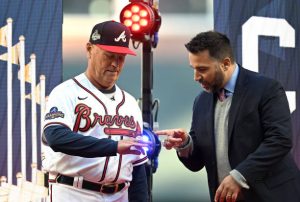 Atlanta Braves General Manager Alex Anthopolous is well known for his aggressiveness regarding trades. Even when he was an executive for the Toronto Blue Jays, he would often pull swaps out of a metaphorical hat. Considering that franchise’s luck over the entire decade of the 2000s, it was not out of bad reasoning nor desperate logic. When Anthopolous took over the General Manager position in October of 2009, the Blue Jays were in something of a funk. They’d had three consecutive winning seasons, yet they remained mired in an American League East that, frankly, had surpassed them. From 2000-2009, they finished third or worse eight times. The only grace period was a 2006 campaign that saw them rise from the ashes to place second in the division.

So, Anthopolous was given a bit of a mess to deal with. It’s not that the Blue Jays didn’t have any talent at all. Names like Shawn Green, Carlos Delgado, Roy Halladay, and Vernon Wells had passed through there. It seems that it was simply a front office that was either unwilling, or unable to build around one key player. Anthopolous, according to Baseball Reference, sought to remedy this situation via aggressive trading and dumping bad contracts. He’s been remedying situations for teams ever since. Now, the Braves are in his charge, and he’s continued his aggressive methods. They’ve brought the Braves unparalleled success.

Let’s begin by addressing Anthopolous’s first big deal in Atlanta. After a division championship in 2018, 2019 rolled around with a lot of promise. Halfway through the year, the promise was coming true. Ronald Acuna Jr. was the young stud people had seen him to be. Freddie Freeman was continuing to lead the team. Offseason free agent splash Josh Donaldson was crushing home runs left and right. Yes, things were indeed looking up for the defending National League East champions…except for one thing. They needed a slightly better bullpen.

By the time the All-Star break rolled around, the Braves’ bullpen had added a win probability factor of 2.25. This was ranked 11th in baseball. They also had the second lowest ERA- for the period, trailing only the Cleveland Indians. However, a walk percentage of over ten put them in the top-ten, and a BB/9 rate of 3.97 was in the top 15. In other words, opposing hitters could essentially hitchhike their way to first base. They needed some help, because it wasn’t a championship ‘pen. Luckily, Alex Anthopolous got a bit aggressive and traded for Chris Martin, Mark Melancon, and Shane Greene. Some of these moves worked better than others, but it did help the team return to the playoffs.

In the pandemic-shortened 2020 season, Alex Anthopolous still found ways to maintain his aggressive reputation. Before the campaign began, a lot of new names were added via free agency. Reliever Darren O’Day, veteran starter Cole Hamels, and catcher Travis d’Arnaud joined the fold. However, the massive splash during the offseason was the signing of outfielder Marcell Ozuna to a one-year, $18 million dollar deal. Then, the pandemic hit and everything went topsy turvy for the rest of the season. A 60-game season meant that things surrounding the traditional trade deadline were catalysts for complete insanity.

In a stark departure from his normal method, Anthopolous was unusually quiet. The only noteworthy move was with the Baltimore Orioles, who shipped Tommy Milone to Atlanta for a couple of minor leaguers. The deal did not pan out for the Braves, as Milone gave up 16 earned runs in fewer than ten innings with the rotation. He was quietly released after this, along with fellow failed experiment Robbie Erlin. Thankfully for Alex Anthopolous and the Braves, this did not hurt them in the long run. The arms of Mike Soroka and Max Fried, and the bats of Freeman and Acuna propelled them to the National League Championship Series. They came up short, but 2021 looked to be their year. Luckily, they were right.

In 2021, Alex Anthopolous pulled off perhaps the greatest trade deadline in the history of baseball. It all started on July 15, when he traded minor league infielder Bryce Ball for Chicago Cubs outfielder Joc Pederson. The next day, another minor league infielder, Mason Berne, was shipped to the Arizona Diamondbacks for Stephen Vogt. On July 30, minor leaguers Ricky DeVito and Kasey Kalich were traded for reliever Richard Rodriguez and outfielder Jorge Soler, respectively. Then, struggling catcher Alex Jackson was traded for a returning Adam Duvall. Finally, Alex Anthopolous managed to send Pablo Sandoval to the Indians for Eddie Rosario.

Superficially, this doesn’t seem like much. However, the impact that these players had helped lift the team out of the mire and into World Series glory. Over the course of their time with the Braves, Soler, Duvall, Pederson, and Rosario combined to hit 44 homers. Meanwhile, Rodriguez pitched to a respectable 3.12 ERA, though he could not quite repeat his success with the Pittsburgh Pirates. All in all, though, it was this combination of potency and power that helped push the team over the edge.

Now, as far as Alex Anthopolous is concerned, he has already begun building a team for next season. If we’re completely honest, 2022 did not end the way any Braves fan wanted it to. 2023 is a chance to recapture what was lost. Every move matters and, at the time of writing, a small one has just been made for Colorado Rockies outfielder Sam Hilliard. Despite him hitting under the Mendoza line last season, there’s always a chance that this move could pay dividends.

Alex Anthopolous has certainly been involved in some of the game’s biggest deals. He brought Troy Tulowitzki and Josh Donaldson to the Blue Jays. He engineered the mega deal with the Miami Marlins in 2012 that saw Jose Reyes and Mark Buehrle end up in Canada. However, his biggest deals came in 2021, which, to date, has been his only World Championship effort. His aggressiveness and willingness to play the big deal have made him extremely popular among Braves fans. Fans are hoping that the offseason will provide more of the same.