The Braves pulled off a massive buzzer-beater just before the deadline, acquiring closer Raisel Iglesias from the Angels in exchange for pitching prospect Tucker Davidson and righty Jesse Chavez, reports Robert Murray of FanSided (Twitter link). Ken Rosenthal of The Athletic tweets that the Braves will pay the remainder of Iglesias’ contract — a four-year, $58MM deal that covers the 2022-25 seasons. 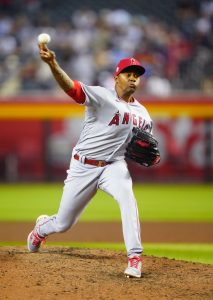 It’s a last-second surprise to bring one the game’s most established late-inning relievers to an already deep Atlanta bullpen. Iglesias has tailed off since an outstanding start to the season but still possesses a reasonable 4.04 ERA with an excellent 32.9% strikeout rate and a 6.2% walk rate so far this season. Dating back to 2017 — Iglesias’ first as a full-time closer (then with the Reds) — he’s pitched to a combined 2.99 ERA while striking out 32% of his opponents against just a 7.1% walk rate.

Iglesias’ 95.3 mph average fastball is down about a mile per hour over the 2021 season, and his 14.9% swinging-strike rate is the second-lowest mark he’s posted as a full-time reliever. Those are both at least minor red flags, particularly when paired with his recent slump, but for most of the season Iglesias has looked the part of a quality leverage reliever, even if his numbers have dipped a bit from last year’s career-best performance.

Braves GM Alex Anthopoulos has a history of acquiring high-priced closers.  He recently shipped out the marginalized Will Smith, the top reliever from the 2019-20 free agent class, for starter Jake Odorizzi.  In March of this year, he signed Kenley Jansen to a one-year, $16MM deal.  The Iglesias trade is reminiscent of a Braves deadline deal from three years ago, when Anthopoulos acquired Mark Melancon from the Giants and was surprisingly willing to take on all of his remaining contract.  In Iglesias, the Braves take on over $51MM through 2025.  Anthopoulos explained today, “We had a lot of things in the works. Iglesias is someone we had our eye on and it came together really late, like with two minutes to go.”

The Braves now boast a high-priced tandem to close out games in Jansen and Iglesias, as well as A.J. Minter, Collin McHugh, and Tyler Matzek.  Rookie Dylan Lee is making an impact as well, succeeding in high leverage spots of late.

For the Angels, the Iglesias deal serves as an escape hatch from an expensive contract.  Ultimately the Angels will only pay out about 11% of the contract they entered into eight months ago.  The Angels are in an odd place, as they’ll fail to reach the playoffs for the eighth consecutive year.  They shed over $58MM in contractual commitments for Iglesias and Noah Syndergaard today, yet they owe over $75MM to Mike Trout and Anthony Rendon next year and only control MVP candidate Shohei Ohtani for two more seasons.

Angels owner Arte Moreno allowed GM Perry Minasian to listen to offers for Ohtani in recent weeks, but decided not to pull the trigger.  Ohtani’s future, and the direction of the Angels in general, will be a question looming over their offseason.

Aside from bailing on a large financial commitment, the Halos add Davidson, a 26-year-old southpaw with Major League experience.  Prior to the season, Baseball America considered Davidson a 45-grade prospect, a potential back-end starter with perhaps three average pitches.  Currently working in his third and longest stint at Triple-A, Davidson has a 4.59 ERA owing to a high home run per flyball rate, but he’s got a strong 20.9 K-BB%.

Chavez, soon to turn 39, returns to the Angels after spending the 2017 season with the team.  The Angels are one of nine teams for which the veteran reliever has pitched in his venerable 15-year career.