Longtime big league catcher Kurt Suzuki will retire once the 2022 season concludes, he tells Jeff Fletcher of the Orange County Register. That comes the day after the Hawaii native’s 39th birthday.

“I feel like it’s time,” Suzuki told Fletcher. “I’ve had a great run, won a World Series, All-Star Game. Played 16 seasons. I’ve accomplished a lot of things I never would have dreamed of. I felt like it’s time for the next chapter. My three kids, all they’ve known is baseball.”

Suzuki began his professional career in 2004. A second-round pick of the A’s out of Cal State Fullerton, he made it to Oakland three years later. Suzuki debuted in June 2007 and cemented himself as the A’s primary catcher from essentially that point forward. The right-handed hitter topped 130 games every year between 2008-11, generally hitting at a slightly below-average level overall but better than average for a catcher. Suzuki’s high-contact approach made him a solid offensive backstop for much of his time in Oakland, and the A’s dealt him to the Nationals in the summer of 2012.

After finishing out that season in Washington, Suzuki wound up back in Oakland via trade in August ’13. He qualified for free agency for the first time after that year, signing with the Twins. Suzuki bounced back from a couple down offensive years to hit .288/.345/.383 and earn an All-Star nod that year, and Minnesota signed him to a two-year extension that summer. His production dipped during his final two seasons in Minnesota, but he rebounded with one of the best years of his career after signing with Atlanta going into 2017. He popped a career-best 19 home runs and hit .283/.351/.536 through 81 games, earning a midseason extension for a second season with the Braves. 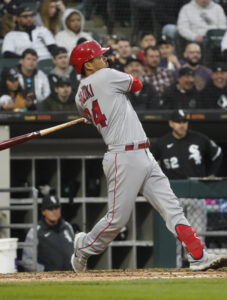 Suzuki didn’t quite replicate his 2017 production, but he posted another above-average offensive season to wrap up his time in Atlanta. After hitting .271/.322/.444 with 12 longballs, he landed another multiyear deal in free agency. Heading into the 2019 campaign, the Nationals inked Suzuki to a two-year, $10MM deal to pair with Yan Gomes behind the dish. That contract paid off in year one, as the veteran hit another 17 homers with a .264/.324/.486 line in 85 regular season games. Suzuki saw his most extensive playoff action during the Nats run a World Series title that year. That included a go-ahead homer off Justin Verlander in the seventh inning in Game 2 of the World Series, the biggest play in a win that gave Washington a 2-0 series lead.

After another solid showing with Washington during the shortened 2020 campaign, Suzuki has played the last two seasons on successive one-year pacts with the Angels. He’s had a couple down years to wrap up his career, working primarily as a backup in Orange County.

Suzuki’s career totals won’t be finalized until the season concludes, but he’s not likely to change his ledger all that much over the final two weeks. As he noted, Suzuki has played in 16 consecutive big league seasons and surpassed 1600 games. He owns a .255/.314/.388 line with 143 home runs, 729 runs batted in and 594 runs scored. Suzuki made an All-Star game and played a key role on a World Series team. Baseball Reference values his career around 20 wins above replacement. FanGraphs, which factors in Suzuki’s below-average pitch framing metrics, pegs him around nine wins.

Independent of that discrepancy in value, there’s little doubt about the impressiveness of a major league career that lasted more than a decade and a half. It’s possible he’ll continue his baseball career in some capacity, as Suzuki indicated he’d be happy to discuss the possibility of assuming a non-playing role with Halos general manager Perry Minasian (with whom he’s also familiar from their overlapping stints in Atlanta). MLBTR congratulates Suzuki on his lengthy career and wishes him all the best in his post-2022 endeavors.