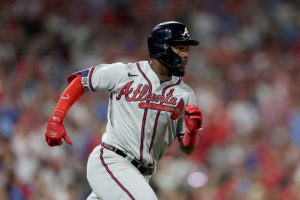 Atlanta Braves outfielder Michael Harris II has been named the 2022 National League Rookie of the Year. The race between he and young hurler Spencer Strider was among the biggest, and most intriguing in baseball this year. However, it is Harris who has claimed the prize. Among NL rookies, there was no one more qualified. He led all with at least 300 plate appearances in average (.297), slugging (.514), wOBA (.367), and wRC+ (136). Balancing out his offensive success was a defensive masterclass. He finished fifth among NL outfielders in Ultimate Zone Rating (4.9), tied for fifth in Defensive Runs Saved (8), and finished third in Outs Above Average (7).

The Career of Michael Harris II

Michael Harris II was drafted by the Braves with the 98th overall pick in the 2019 Draft. He is a native of the Atlanta area, and went to school in Stockbridge, Georgia. After signing, he was assigned to the Rookie level Gulf Coast Braves. He almost immediately made an impact, slashing .349/.403/.514 with an OPS of .917 in only 31 contests. Things went a bit south after a jump to the Single-A Rome Braves. Harris struggled to a .183 average, and a .501 OPS in 22 games that year. After this, the pandemic hit, and the minor leagues found themselves cancelled for 2020.

However, this didn’t stop Michael Harris II, who came out with a fury in 2021. Back in Rome, he slashed .294/.362/.436 with an OPS of .798. These goo numbers earned him a promotion to Double-A Mississippi before 2022. Once again, his success was almost instantaneous. He bashed opposing pitching to the tune of a .305 average, and 53 hits in only 43 games. These results earned him a ticket to Atlanta with a chance to start. The Braves’ outfield was definitely in need of help, and Michael Harris II delivered. Now, the end of his first campaign finds him hoisting the NL Rookie of the Year trophy.