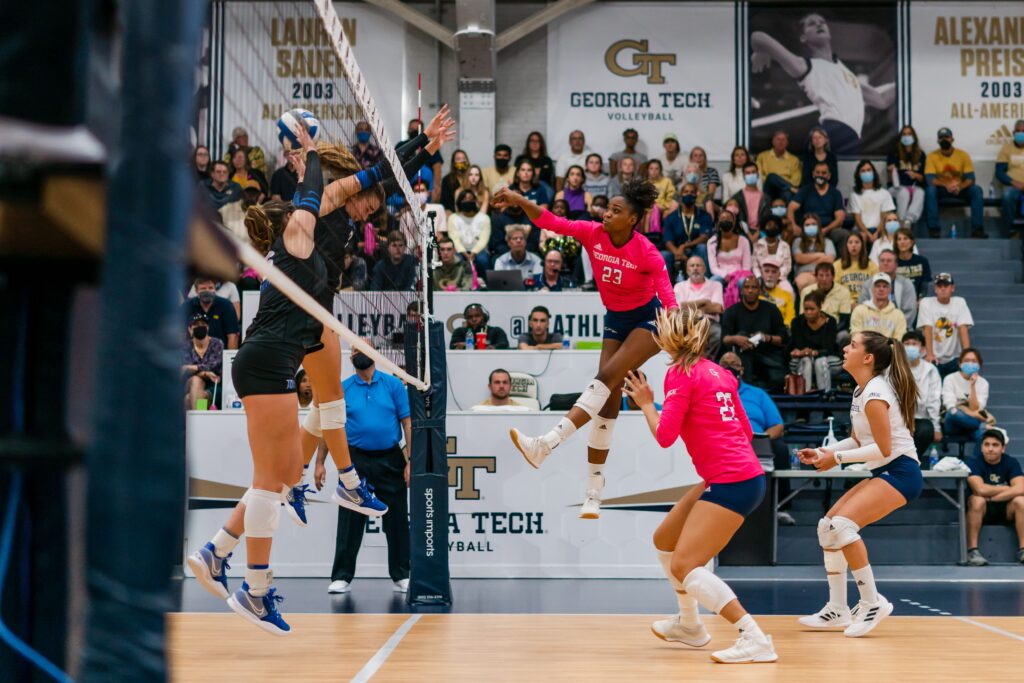 This year, Tech has celebrated the 50th anniversary of the passage of Title IX, a 1972 amendment to the Higher Education Act that prohibited discrimination based on sex in federally-funded colleges and universities. Its 37 words promise equitable treatment to women in college sports, but differences in recognition and resources between men’s and women’s sports can still persist.

Differences between the popularity of individual sports can have a large impact on their presence on campus, but Title IX demands that gender does not contribute directly to any discrepancies.

Tech boasts eight men’s and seven women’s varsity sports with varying sizes in teams and coaching staff. The volleyball program is unique, because it is the only sport at the Institute with just a women’s team. The team is also significant as it has seen the most success out of any fall sport this year, currently ranked No. 13 in the nation. Despite its performance, members of the volleyball program admit that gender plays a role in how they are treated compared to other sports.

“We’re definitely very behind from where we need to be from an equity standpoint,” said Michelle Collier, head coach of Tech volleyball, regarding all levels of sports in America. “Probably one of the main things is just understanding that as much as we we got to make sure we’re looking at small changes that are happening and appreciating those, and then continue to work on the things that we can control.”

Collier described how the program has been rewarded as it has improved and grown over the years. Volleyball has seen more exposure through television broadcasting and increased support from students and the Athletics Association. She believes that the team has everything they need to succeed but noted that improvements in their facilities and increases in the number of chartered flights would be appreciated.

Collier’s statements on the improvements were also echoed by one of her players.

“The support, at least internally, that you’re seeing given to the male student athletes, the female student athletes are also getting, and I think that’s a testament to our staff,” said Erin Moss, fourth-year CHBE and senior middle blocker on the volleyball team. “It’s taken us a few years to sort of get our feet up underneath us and for us to be worthy of that respect and that attention.”

Moss said the program has grown in their performance and support throughout her time on the team, but she also wishes for upgrades in facilities and more prime television time, something that she thinks other volleyball programs could benefit from across the nation. Moss was also signed to a name, image and likeness (NIL) agreement by Adidas this year in celebration of the anniversary of Title IX and lauded that “it’s really great that [Adidas has] used NIL as a way to promote Title IX and to keep the conversation going about women’s sports.”

As the volleyball team has grown and observed some gaps in gender equality, other sports at Tech have had similar experiences. While not recognized officially by the NCAA, cheerleading is supported by the Tech Athletics Association and is subject to differing views of the sport as a whole.

“I think, historically, we’ve kind of been always at the bottom of the totem pole,” said Emily Thom, fourth-year IE and captain of the Gold Squad of Tech cheerleading. She explained that the team has had to prove their status as a sport, saying that “it’s definitely something that we have to work towards keeping a good reputation and maintaining that reputation because everything that we have is a privilege to us.”

Thom described the balance between fulfilling their duties as entertainers at sporting events and contending with “the typical old school view of cheerleading [that] kind of still exists.” The cheerleading team is co-ed and Thom says it is very equal along gender lines, but understands how traditional views of cheerleading may prioritize the appearances the team makes for other sports teams.

However, cheerleaders train and compete just like other athletes at the Institute. Between their multiple practices and appearances, Thom says the team prepares for their own competitions, which have a larger focus on skills like tumbling and stunting.

Altogether, Thom says the treatment from the Athletics Association has made the cheerleading squad feel equal to other programs, but she still sees ways that would help affirm their status as a sport at Tech. A potential change would be offering full athletic scholarships for cheerleaders like NCAA-regulated sports receive; currently, members of the cheer team must fundraise to pay their fees and sponsor themselves at competitions each year.

Overall, student athletes and coaches in women’s sports feel supported by the Athletics Association and seem proud of the work Tech has done to uphold Title IX. As Akin noted, “part of [her] job is to ensure that Title IX regulations are followed and that all Title IX inquiries or complaints are reviewed in accordance with Georgia Tech policy and federal law, which we do.”

Tech has shown that its female student athletes feel equal to their male peers, but there can always be room for improvement as Title IX’s sixth decade continues. A shared belief between the women’s sports programs is the pressure to prove themselves to earn recognition, something that fails to intimidate them as they enter the next decades of Title IX.