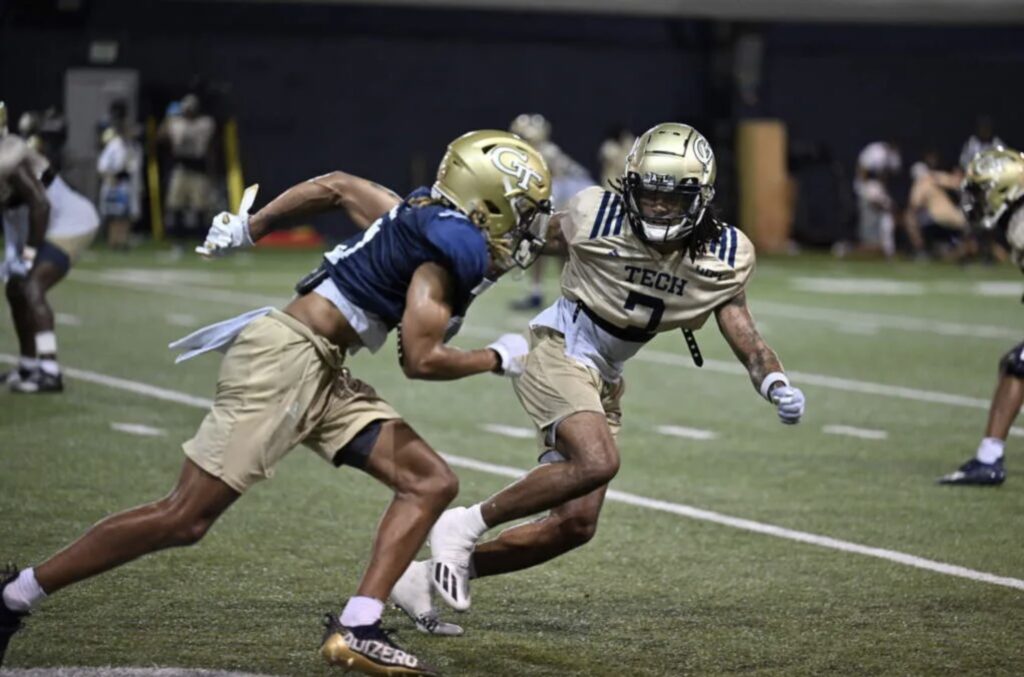 Tech football is coming in hot for the 2022 season. Despite a tough last season when the Jackets went 3–9, there are encouraging signs from the 2022 team. The team — built from the disappointment of the past year — is expected to have more promise and production than what has been seen at Tech in a while.

Tech football was certainly busy during the offseason, having  brought in highly ranked recruits and multiple Division I players from the transfer portal. Headlining the group of most recent recruits are safety Jaylin Marshall and running back Antonio Martin. Both
athletes were ESPN 300 players in the class of 2022. Marshall and Martin are joined by three more 4-star recruits including a defensive tackle, wide receiver and another running back. Aside from the future young stars, the Jackets also had promising action with veteran players in the transfer portal.

Ultimately gaining 13 new players through the portal, Tech had the fourth-best transfer portal results in the ACC according to ESPN. The Jackets’ newest additions come from a multitude of colleges and divisions, including the SEC, Big 12, Pac-12 and ACC. In addition to highlighting the new players, it is important to remember and appreciate the returning talent.

Highlighting the returning talent is sophomore quarterback Jeff Sims, who had 1,000+ yards of production in each of his first two seasons, averages a 58% pass completion rate and currently has a ratio of 25 touchdowns to 20 interceptions. While the completion percentage is not as high as others, Sims heads into the 2022 season with more experience and improved accuracy to clean up the interception rate.

Malachi Carter is the reigning receiving yards leader on the team as he enters his senior season. Last year, Carter totaled 489 yards on 37 receptions, averaging 13.2 yards per receptions. Carter has improved his game with each season that passes. Considering the loss of a major receiving threat in sophomore running back, Jahmyr Gibbs, to the transfer portal at the end of last season, Carter is in a position to have a breakout season.

On the defensive front, senior linebacker Charlie Thomas is a name to watch. He led the team with two interceptions last season and totaled 70 tackles. An increase in production from the defensive leaders alongside the newest recruits would be a great addition to the Jackets’ upcoming season.

Last season the Jackets went 3–9 and won only two conference games. The 2021 season ended with two blowout losses to Notre Dame and Georgia, in which Tech gave up a combined total of 100 unanswered points.

Although this year’s schedule will generate varying levels of competitiveness for the Jackets, the most challenging of them all will be the last game of the season when Tech takes on their long-standing rival, Georgia, who is coming off of a national championship-winning season.

Regardless of how the season ends, the Jackets will want to improve on their 3–9 record from last season. After the lackluster season, the Jackets are aiming for progress and better production heading into the 2022 season. They start their action at Mercedes Benz Stadium here in Atlanta on Sept. 5 as they take on the Clemson Tigers. The game will start at 8 p.m EST.

When Tech returns to play their first home game of the season, it will signify the start of the 110th football season played at the historic Bobby Dodd Stadium. The boys of fall kickoff the home action on Saturday, Sept. 10 at 7 p.m. EST against Western Carolina.