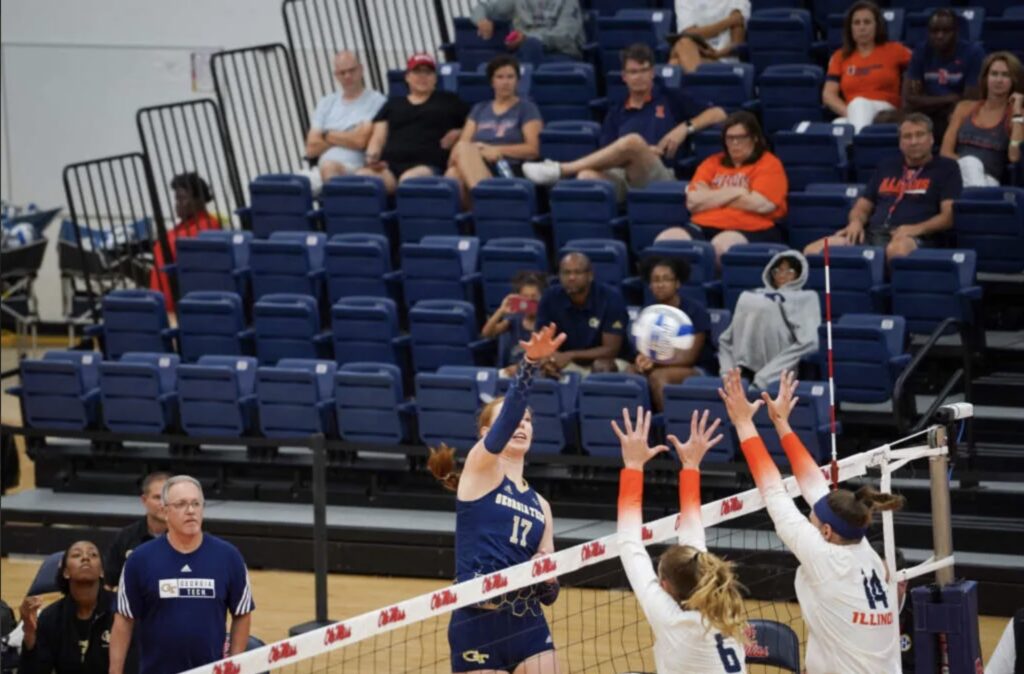 The 2022 Tech volleyball team has had a great start to their season. Coming back after a terrific season last year, the players have shown no hesitation in rising to the occasion again this season.

To kick off the season, the team played a home intrasquad scrimmage game, splitting between Gold and White teams. White took an early lead and won the first set 25–21 and then continued to push through winning the second set 25–14. The gold team fought back and battled out the third set going into extra points. Finally, the gold took the third set 28–26. The gold continued to triumph in the fourth set with a whopping 25–14 victory. The game ended in a tie with both teams taking two sets.

The scrimmage game introduced five new members of the team mixed with the thirteen returning members, including 2021 First Team All-American senior Julia Bergmann. Bergmann shined all around with 13 kills, 14 digs and three blocks, but she did not work alone. Behind her was an amazing squad, including sophomore Bianca Bertolino with 15 kills, seven digs, four blocks and three aces. Junior Isabella D’Amico led the team with 31 assists. Overall, the girls showed teamwork that would continue into their games to come.

On Sunday, Aug. 21, the team hit the road to Columbia, SC where they played the South Carolina Gamecocks. The team started strong, dominating the first two sets by a margin of 25–20. The third set started with a six-point run to take the lead early and then finished with a five-point streak to take the set 25–16. The Gamecocks surged back in the fourth set to win 25–16. Finally, the White and Gold closed the match with a 15–10 victory. Overall, the team won 4–1 against South Carolina, starting off the season with a
decisive sweep.

On Friday, Aug. 26, the players traveled again to compete in the Ole Miss Invitational in Oxford, MS. Tech kicked off the invitation by playing against the hosting Ole Miss Rebels on Friday. The Rebels started strong with a 25–13 victory in the first set. The Jackets jumped back into action in the second set with Julia Bergmann leading the way with a three-point run of kills to push Tech ahead. The second set went into extra points, but the Jackets finished strong, ending the second set 26–24. The third set was a fight to the finish. Both teams went back and forth with the lead. Tech’s own Erin Moss sealed the victory in the third set with a kill from the middle for a score of 28–26. The Jackets surged forward in the fourth set with a five-point lead before the Rebels bounced back hard. The two teams battled it out and tied 22–22 before carrying the set once more into extra points. Finally, Tech took the fourth set win 27–25 and won the match 3–1.

On the second day of the Ole Miss Invitational, the White and Gold played their first ranked team of the season, the No. 17 Fighting Illini from Illinois. The first two sets the Jackets triumphed from beginning to end. The third set was a close match for the first half with neither team taking more than a one-point lead over the other until the score was 15-all. Tech cranked up the gear in the second half of the set, propelling them into a tremendous lead and eventually taking the third set 25–17. The Jackets took the game with a
crushing 3–0 victory.

The Ole Miss Invitational ended with Tech as the only undefeated team. On top of the team victory, Julia Bergmann climbed her way up the school recorder book as she scored 133 career aces, the seventh highest in the history of Tech’s volleyball program.

Up next, the Jackets will take on the Dayton Flyers, Arizona State Sun Devils and FIU Panthers on their very own court in the GT Invitational from Sept. 2–4. Tech heads into the tournament boasting the nation’s No. 5 ranking by the AVCA poll, the team’s highest ranking since 2003 when Tech held that mark for a month.