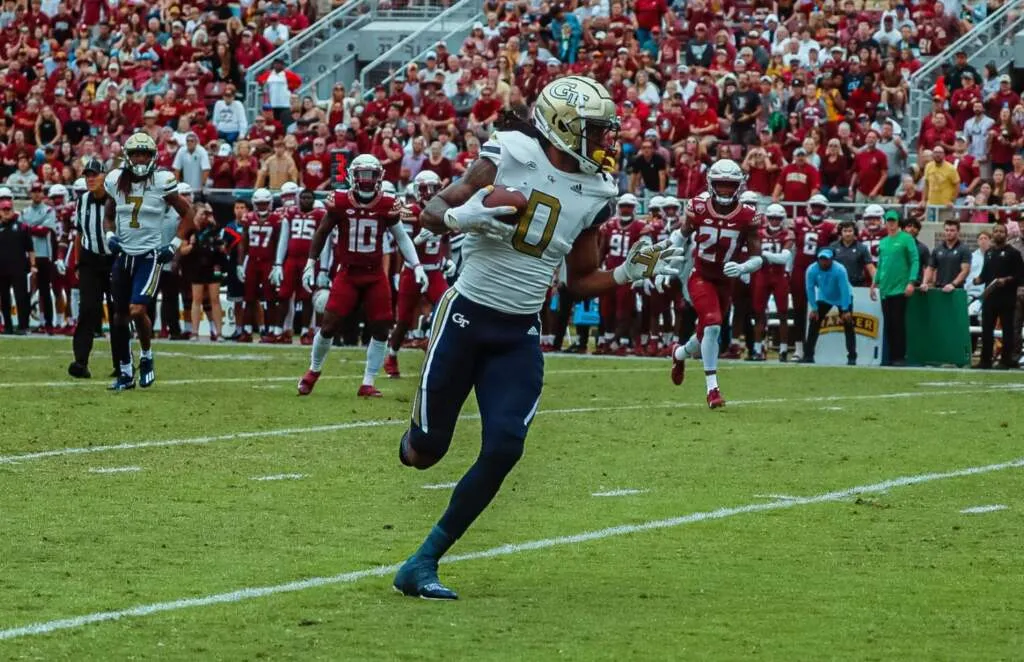 After a disappointing loss to the University of Virginia where the Jackets failed to score a touchdown offensively, the offense struggled again against FSU, scoring only 16 points. Sophomore quarterback Jeff Sims sat out due to a foot injury that occurred during the loss to UVA, and the combination of redshirt sophomore quarterback Zach Gibson and freshman quarterback Zach Pyron was not enough to create an offensive resurgence.

At 12 p.m. on Oct. 29, the Jackets received the kickoff to open their game against unranked FSU (4-3, 3-3 ACC). Akron transfer Zach Gibson trotted onto the field to start the game for the Jackets. The start was not what interim head coach Brent Key wanted to see, as the offense went three and out and the Jackets quickly punted it away to the Seminoles. Jordan Travis, FSU’s redshirt junior quarterback, and Trey Benson, the ‘Noles redshirt sophomore running back, took possession and were quick to move the ball. They got down to the Tech 33-yard line where their drive stalled, and they failed to convert on a fourth-and-3. The Jackets were set up with decent field position.

The next drive for the Jackets shared many similarities with the first: another three and out and the ‘Noles got the ball back. The punt only flew 27 yards and the Seminoles were set up with field position around midfield. This would be Gibson’s last drive for the night. Tech would turn to Pyron, from Pinson, Ala., for the rest of the game.

On FSU’s next possession, they methodically went down the field with a mix of running and passing plays, and with the help of a pass interference penalty, they got down to the 1-yard line. On third-and-goal from the 1-yard line, the snap was fumbled, and senior linebacker Charlie Thomas recovered it and ran it back all the way to the FSU 24-yard line.

The Jackets were unable to get a first down for the third straight drive, and they settled for a 38-yard field goal by sophomore kicker Gavin Stewart. The kick was clean and the Jackets led 3-0. This would be the only time the Jackets held the lead in the game.

The next two possessions for the Seminoles resulted in 80- and 90-yard touchdown drives, respectively, and the Jackets quickly trailed again 14-3. The second drive was capped off by a 78-yard touchdown throw from Travis to redshirt sophomore wide receiver Johnny Wilson.

After more three and outs by the Jackets, the Seminoles were able to tack on another 10 points and take a 24-3 lead heading into halftime. The Jackets totalled only one first down in the first half.

Key was quick to make adjustments in the halftime locker room as the Jackets came out firing early in the second half. After a successful onside kick to start the half, Pyron led the team down the field, and redshirt senior wideout E.J. Jenkins hauled in a 32-yard touchdown to reduce the Seminoles’ lead.

After a penalty on the kickoff, the ‘Noles were pinned deep inside their own 10-yard line. This was the Jackets’ chance to turn the momentum of the game around. Instead, Travis took his team down 91 yards in five minutes to score a touchdown and extend the lead back to 21 points.

The Jackets’ offense was considerably better in the second half, as the Jackets had 15 first downs. This spark in offense, though, did not translate over to the defensive side of the ball. The Tech defense continued to struggle and FSU moved the ball at their will. Both teams scored two touchdowns in the second half, and FSU ended up winning 41-16.

Travis totalled nearly 400 passing yards and three passing touchdowns. FSU doubled the amount of first downs and total yards compared to the Jackets’ offense. Overall, the disappointing showing by the defense with the combination of a slow start on offense made the game out of reach early.

Pyron was a bright spot for the Jackets. Once he settled in after a couple of drives, he led the team to multiple touchdown drives. He totalled just under 200 passing yards and had both a passing and rushing touchdown. If Sims continues to be held out due to his injury, Pyron will be a good alternative for Key’s offense.

The Jackets will be looking to break their two-game losing streak on Nov. 5 at 12:30 p.m. against Virginia Tech. Sims’ status is still unsure next week for the Jackets. The Hokies will be coming off a one-point loss to NC State.