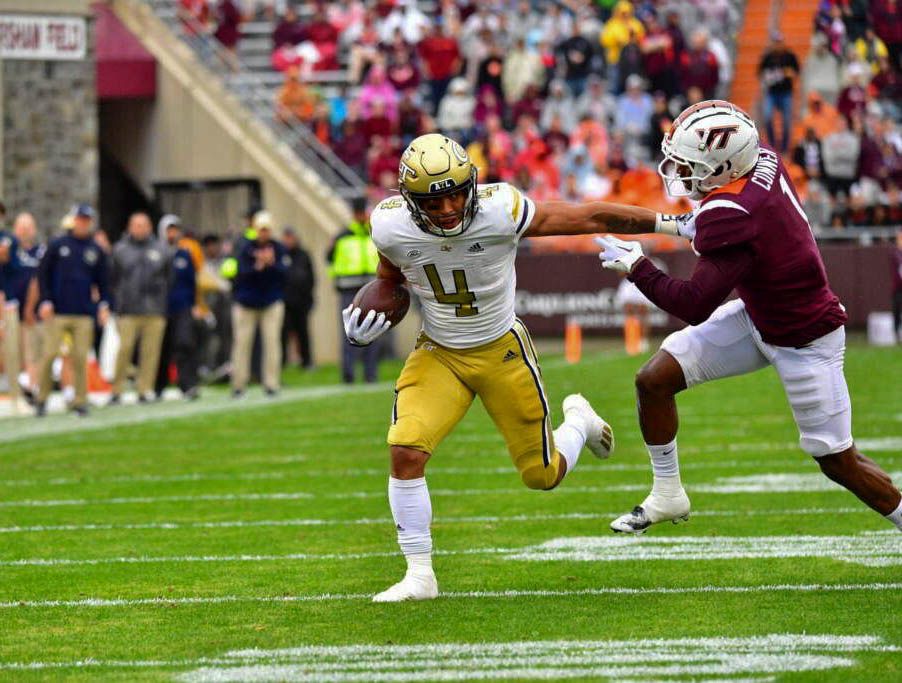 Coming into Blacksburg, the Jackets did not appear to be at the top of their game. They followed up a heartbreaking 16-9 loss to Virginia with a 41-16 drubbing by FSU. For most of the week, it was not clear if sophomore quarterback Jeff Sims would be able to return from a foot injury sustained in the Virginia game. Ultimately, freshman quarterback Zach Pyron was named to his first career start. Against FSU, Pyron performed well in relief of redshirt sophomore quarterback Zach Gibson, but it was anyone’s guess whether Pyron — and the Jackets — could capture a much-needed ACC win.

Tech’s first drive was far from encouraging. They gave up a five-yard sack on the very first play from scrimmage and went three-and-out. However, when the Jacket defense forced a punt on Virginia Tech’s first drive, the offense capitalized with a 70-yard drive punctuated by a 29-yard touchdown run from redshirt junior running back Dontae Smith.

The opportunistic Tech defense kept rolling by forcing Virginia Tech quarterback Grant Wells to fumble, which sophomore defensive lineman Noah Collins recovered. Starting from their own 24, the offense was able to drive into field goal range and set up an easy 19-yard field goal for sophomore kicker Gavin Stewart, thanks to a 45-yard connection between Pyron and redshirt senior wide receiver E.J. Jenkins. Tech was able to shut out Virginia Tech in the first quarter, which was encouraging to see from a defense that had struggled the week before.

Both offenses then traded punts to open the second quarter until the Hokies got into the end zone on a 3-yard touchdown run by Wells. The Jacket offense was not able to respond, punting on consecutive drives while the defense allowed Virginia Tech running back Keshawn King to score a 1-yard touchdown run to take the lead. Down by three points due to a blocked Virginia Tech extra point attempt, Pyron was sacked on first down, setting the Jackets too far back to convert. Unfortunately, Hokies kick returner Tucker Holloway tore through the Jackets punt coverage team and returned sophomore punter David Shanahan’s punt 90 yards for the score, putting the Hokies up 20-10 late in the second quarter. A rumbling 28-yard run from Smith set up a 27-yard field goal in the final seconds of the second quarter, but the Jackets were still down 13-20 heading into halftime.

The Tech defense was able to sack Wells on the first drive of the second half and bring the offense quickly back on the field. Some big runs from senior running back Hassan Hall and timely throws from Pyron to senior wide receiver Malachi Carter allowed Stewart to convert another field goal to make the score 16-20.

However, the next offensive drive saw Pyron make his biggest mistake of the day. Rolling out of the pocket, his pass was picked off by Virginia Tech linebacker Keli Lawson and returned for a pick-six that put the Hokies up 16-27. The 11-point deficit seemed like too much for the offense to overcome, as the next two offensive drives did not get a first down. The third quarter ended with the Jackets looking lost and defeated.

However, the Jackets came alive in the fourth quarter and essentially closed out a victory in the last 10 minutes of play. It began with a game-changing forced fumble by redshirt sophomore defensive lineman D’Quan Douse who also blocked the point-after try earlier in the game. On the Tech 10-yard line, Pyron took advantage of the redemption opportunity to engineer one of the best offensive drives of the season. In only five plays, the Jackets scored on a 56-yard touchdown pass from Pyron to sophomore wide receiver Nate McCollum.

Down five, the pressure then fell on the Jackets defense to hold the Hokies in check. Once again, they came up big. A deflection by redshirt junior defensive back Zamari Walton ended up in the hands of freshman safety Clayton Powell-Lee for the timely interception. Starting from their own 27, Pyron showed some clutch ability, erasing the deficit himself on a nine-yard touchdown run to put the Jackets up, 28-27. Feeding off the momentum, the Tech defense forced another punt, thanks to a key third down sack. Unfortunately, on their next possession, the Virginia Tech offense got hot and advanced to their own 42. However, senior linebacker Charlie Thomas had other ideas, teaming up with Powell-Lee to force another fumble on Wells that officially ended the game.

Statistically, this was the Jackets best offensive performance of the year as they amassed a season-high of 463 yards to capture the important ACC win. While the Virginia Tech pass defense was not particularly imposing, Pyron performed well in a big spot and recovered nicely from his pick-six.

Pyron was aided by McCollum setting a new career high of 103 receiving yards, big runs from running backs Hall and Smith, and a similarly impressive defensive performance. Douse’s 2.5 sacks, Powell-Lee’s clutch takeaways and Thomas setting a new career high in tackles with 16 played a huge role in limiting the Hokie offense to zero points in both the first and fourth quarter. Pyron, Powell-Lee and Thomas all earned ACC recognition for their performances.

Interim head coach Brent Key will also have to make an important decision on the starting quarterback next week. Hopefully, Sims will return fully healthy, but Pyron’s performance suggests that he might be a better option if Sims’ injury limits him in any way. The Jackets rebounded nicely as a team from a disappointing two-week stretch. If the Jackets can sustain this explosive offense and strong situational defense, they can make some noise in a weak ACC Coastal Division.

Fans will be watching as the Jackets take on Miami in Bobby Dodd Stadium on Nov. 12 in hopes of capturing another important ACC win and moving within a game of bowl eligibility.