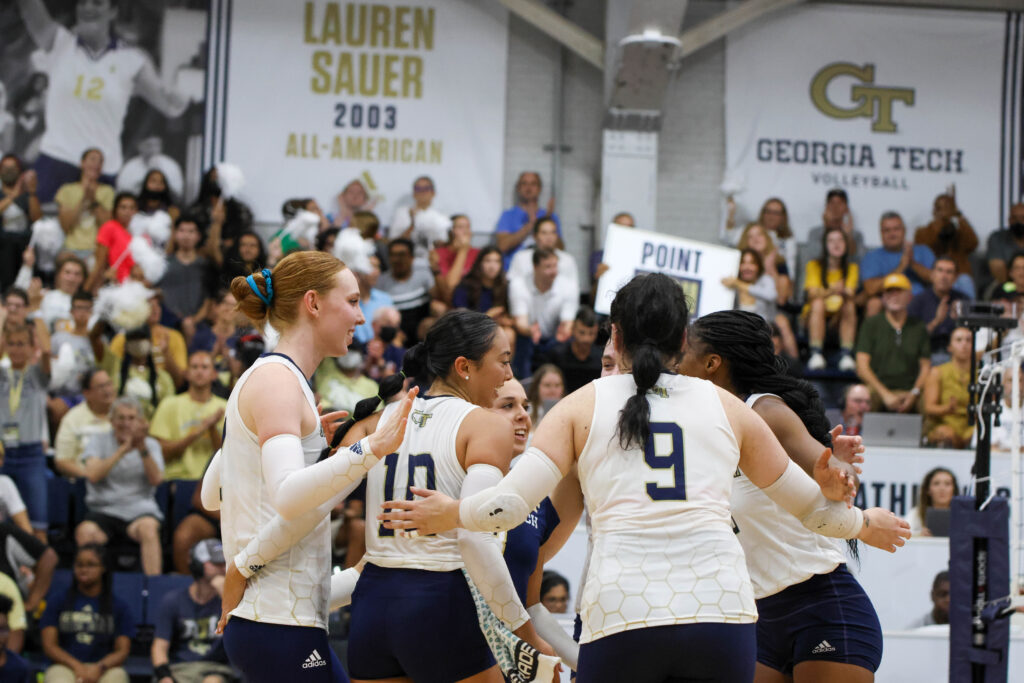 There was serious competition served up last weekend at the annual GT Invitational. The volleyball tournament started on Friday, Sept. 2 and concluded Sunday, Sept. 4. The four competing teams were Arizona State University, Florida International University, University of Dayton and Tech as the host. Jacket volleyball is flaunting serious power and promise for the 2022 season.

The Jackets started the season ranked No. 9 in the preseason coaches poll. The team jumped up four spots to become the No. 5 team in the nation after they dominated Ole Miss in four sets and No. 17 Illinois in three sets at the Ole Miss Invitational. A couple of Tech stars, seniors Breland Morrissette and Julia Bergmann, were voted to the All-Tournament team, and Bergmann received the highest honor of tournament MVP.

The domineering presence of the Jackets at Ole Miss heightened the expectation of what they could do on their own court. Accordingly, the home debut of the hard-hitting Jackets was highly anticipated. The anticipation peaked Friday night at O’Keefe Gymnasium. By the time the Jackets took the court for their warm-up, there was standing room only in the gymnasium. The student section was loud and proud, the band was playing with spirit and the electrifying energy within the arena was unmatched.

The results of Friday night’s matchup lived up to the hype and expectations. During the first set, Tech devastated the Dayton Flyers. Both teams went head to head for the first 10 points, but Tech ran away with the victory in the second half of the set, defeating Dayton and taking the victory 25–15. The second set went similarly with the Lady Jackets winning 25–14 after taking an early 17–6 lead that the Flyers could not overcome. Arguably, the most interesting thing to happen on the court Friday night was when members of the student section, staff, children, players, coaches and officials cleaned the court in between the second and third set. Even more important, Georgia Tech won the third set 25–19 and swept the match versus the Flyers.

Bergmann and senior Erin Moss were the heavy hitters of the Dayton match. The Flyers had no answer for their power, allowing Bergmann 16 kills on 29 attempts and Moss seven kills on no errors. Defensively, senior Paola Pimentel and sophomore Bianca Bertolino recorded eight and 12 digs, respectively. Junior Isabella D’Amico tallied 28 assists.

Tech came out with the same winning-mentality on Saturday night against Arizona State. The Sun Devils were able to keep the sets closer than the Flyers, but as usual, the Jackets reigned supreme. Tech won the first set 25–17 after starting the game with a service ace from Bertolino. During the second set, ASU came to play and kept the set close the entire way, but Tech caught a second wave of energy near the end of the set and won 25–22. Entering the third set, the Sun Devils were playing hard and jumped to an early 2–0 lead. While the Jackets overcame that small deficit, they were soon in a nine-point deficit that they could not conquer. They fell 25–13 to Arizona State in the third set. However, Tech was not going down that easily, and they, very poetically, started the fourth set with a 2–0 run that quickly turned into a 7–1 lead. Consequently, the Jackets were able to gain more traction that turned into a 16-point lead (21–5) and led to their 25–10 fourth set win.

Bertolino was not to be denied defensively anywhere on the floor, attaining 21 digs during the match. Bergmann put an absurd amount of points on the board with 23 kills. Moss and Morrissette followed with eight and six kills, respectively. Moss was also a defensive presence at the net with three blocks. D’Amico tallied 36 assists which gave her 78% of all  assists during the match.

To wrap things up, the Jackets kept pace and swept Florida International University in three sets. They wrapped up the first set with a 25–21 score, which for Tech could be considered a slow day. The next two sets were more reflective of the total domination that is the Tech volleyball team. Set two was won 25–11, and set three was won 25–9, creating the largest point disparity for the Jackets all season. Everything went right for the team in the third set, and if they keep the same level of production, they could be a scary opponent to face the rest of the way.

Tech had a group of power hitters versus FIU, as junior Tamara Otene led the team with nine kills, followed by Bergmann with eight, and Bertolino with six. D’Amico, once again, contributed a high rate of assists with 19 in Sunday’s match. Bergmann led the team in digs with nine, and Bertolino and Pimentel each provided six digs of their own.

At the conclusion of the GT invitational, the Jackets were named the tournament champs. Bergmann, Bertolino and Moss were all named to the all-tournament team. Bergmann walked away with the tournament MVP after stellar performances against all three opponents.

All things considered, the 2022 Tech volleyball team seems to have even more promise than last year. The 2021 team advanced to the Elite Eight of the NCAA tournament before being defeated by ACC rival Louisville, who was the No. 1 seed. This year, the top-five ranking for the Jackets puts them just behind third-ranked Louisville, who they will play later this year.

Tech head coach Michelle Collier has a lot to look forward to during the 2022 season. The team that she, along with her associate head coach, Claudio Pinheiro, and assistant coach, Arielle Wilson, have put together could be one for the ages, if the first few weeks are anything to go by. The rhythm that can be seen courtside between the coaches and athletes is something special, and the energy that they bring to O’Keefe Gymnasium is electrifying. If the Jackets keep up their pace, they might go farther than any Tech team before them.

The Jackets will be back in action at home, Thursday, Sept. 8 at 7 p.m. versus the BYU Cougars.