The trade which sent Calvin Ridley from Atlanta to Jacksonville this past Tuesday caught many around the NFL off guard. With the suspended wideout ineligible to play this season, the timing of the deal came as a surprise, but the teams had been in talks regarding a swap dating back months. 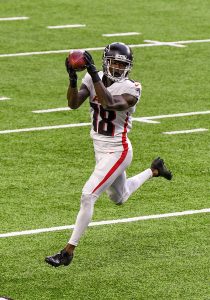 As detailed by ESPN’s Michael Rothstein, Jacksonville identified Ridley as a potential target during this past offseason. The Jaguars entered the spring with a new head coach in Doug Pederson, and a need to add at the skill positions around second-year quarterback Trevor Lawrence. That resulted, most notably, in the high-priced free agent addition of Christian Kirk, but the possibility of acquiring Ridley was a topic of conversation.

“These discussions have been ongoing for a long time and everything we do here, we understand there’s a lot of parties involved in it,” Falcons coach Arthur Smith said. “[There’s] a cause and effect in a tough business and [we] always do everything in the best interest of the team and in regards to the players we got.”

The Jaguars certainly weren’t the only interested party in Ridley. It became known days after the 27-year-old was issued a year-long gambling suspension in March that Philadelphia almost completed a deal to acquire him. That near-trade demonstrated Atlanta’s willingness to part ways with the 2018 first-rounder, whose final Falcons season ended after he stepped away from the team for mental health reasons.

As Rothstein notes, the effect Ridley’s suspension had on his contract likely played a part in the Falcons being able to move him. The Alabama product is due $11.1MM on the fifth-year option in 2023 (assuming he is reinstated in time to play next season). That final year of his rookie deal tolled as a result of the suspension, but the figure is also no longer guaranteed. Atlanta has made a number of cost-cutting moves this year, including the deals sending away quarterback Matt Ryan and linebacker Deion Jones. Clearing Ridley’s 2023 cap hit will give the team some added financial flexibility as they pivot to first-round rookie Drake London to lead their WR room, while closing the book on Ridley’s time in Atlanta.

“This wasn’t something that happened at the trade deadline,” Smith further explained. “It was a long process. So leave it at that.”