A handful of second-round picks have not signed their rookie contracts, with Texans decisions on guarantees believed to be holding up early-second-round draftees’ contract agreements. One of those players, Falcons linebacker Arnold Ebiketie, finalized his deal Wednesday. 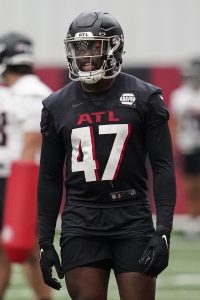 The Falcons now have Ebiketie, this year’s No. 38 overall pick, signed through 2025. Desmond Ridder is now the only unsigned Falcons rookie. Fewer than 25 draft choices have yet to sign their rookie deals.

Ebiketie is slated to be an edge rusher for the Falcons, who have retooled on the edge this offseason. Ebiketie and third-rounder DeAngelo Malone join Georgia native Lorenzo Carter — a former Giants third-round pick — as new additions to the group this offseason.

Ebiketie is not a lock to start for the Falcons in Week 1, but his draft slot and the team’s lack of impact players on the edge would make such a reality unsurprising. As the new Falcons regime’s top edge investment thus far, Ebiketie should be a full-time player at some point during his rookie season.

A Temple recruit who later transferred to Penn State, Ebiketie broke out as a senior in 2021. He registered 9.5 sacks (third in the Big Ten) and 18 tackles for loss, helping the Nittany Lions rank seventh in Division I-FBS scoring defense. Ebiketie recorded two sacks against College Football Playoff-bound Michigan and notched at least one TFL in all but one game last season.