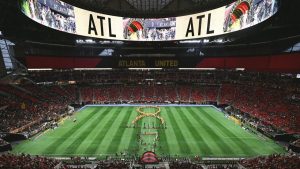 Before tonight’s match, pediatric cancer fighters, survivors and their families gathered on the pitch to form a human ribbon

Three keys to the game

Full Game Summary:#UniteandConquer was able to get behind #TFCLive’s backline.

Toronto FC did not have many scoring opportunities and only had two shots on goal.#ATLvTOR | 4-2 | #MLS

TFC had trouble stopping Atlanta from getting past their backline. This was true throughout the game, especially in the first half.

62’ #UniteandConquer retakes the lead! Some great team-passing results in Juanjo Purata heading the ball into the back of the net! Amar Sejdic gets credited with the assist. #AtlantaUnitedFC #ATLvTOR | 2-1 | #MLS pic.twitter.com/ug4DwHvYE0

This was bigger of a factor in the second half, one common theme for both halves is Toronto giving too much space for Atlanta to play with. This resulted in Atlanta United FC’s Thiago Almada scoring a fantastic goal from outside the box, which made it 3-2. Also, Almada’s shot being stopped by Westberg created a corner late in the second half that resulted in Atlanta’s fourth goal of the game.

This was probably the biggest reason why Atlanta won the game. Three of their four goals were created by corners. Yes, Mark-Anthony Kaye’s mistake led to the first goal, which drew a corner.

47’ #UniteandConquer finally gets their goal! Brooks Lennon delivered a terrific cross and Juan José Purata’s header goes into the back of the net. #AtlantaUnitedFC#ATLvTOR | 1-0 | #MLSpic.twitter.com/icpUOiaNuM

This along with Purata’s second goal was the reason why Atlanta won the game. It is also a shame for Westberg on the last goal as he was forced to make a save for an Atlanta corner. That corner ended up being Atlanta’s fourth goal. All in all, it was a result that Atlanta deserved considering the level of play for both teams. Atlanta could have scored more goals as Westberg made a penalty save early in the game.

Toronto FC did not create that many scoring chances.

52’ #TFCLive ties it! Ayo Akinola receives a pass from Jesús Jiménez and his initial shot blocked. However, Akinola gets a second chance and puts the ball into the back of the net. #TorontoFC#ATLvTOR | 1-1 | #MLSpic.twitter.com/EtH30oqed0

The only other big chance had was late in the game, when Deandre Kerr’s shot hit the post and almost went into the back of the net. However, for the most part, Toronto converted on most of their scoring chances. Their problem was creating those scoring opportunities, which can result in goals.

3 – Juan José Purata is the first player since at least 2010 to score three headed goals in a single @MLS match. Soaring. pic.twitter.com/EXCZ1xxw0A

After an impressive string of form for TFC’s defence as of late, they did not play well in the Canadian Classique game last week nor the game yesterday against Atlanta United FC. It is important to point out though that getting a point on the road is much harder than at home.

It is also unfortunate as there were some great individual defensive plays by Domenico Criscito and Lukas MacNaughton. Moreover, goalkeeper Quentin Westberg played well today but needed more help from his backline. The only big positive headline was probably Doneil Henry making his 100 appearances for TFC.

The chances for TFC of making the MLS Cup Playoffs are slim to none. They are now second last in the Eastern Conference. They are seven points behind the Columbus Crew SC, who has played two fewer games than TFC. It seems inevitable that TFC will not qualify for the MLS Cup Playoffs. A big factor for this was only getting one point in their last two home games against the LA Galaxy and CF Montreal.

The man of the night

TFC’s next game is on September 17 against Orlando City SC in Florida at Exploria Stadium. That game will be shown live nationally in Canada on TSN and will also be shown on Fox 35 Plus at 7:38 p.m. ET.

This is while Atlanta has two games to play by next Saturday. They first travel to Florida to face Orlando City SC at 6:08 p.m. ET on Wednesday. They will then host the Philadelphia Union at 3:50 p.m. ET on Saturday. Fans can watch the Orlando-Atlanta game on MLS LIVE on DAZN, Fox 35 Plus, and Bally Sports Southeast.